What is the compostela?

Since the pilgrimage to the Apostol Thomb has arosed spontanesouly during the IX and X centuries was institunialized with different social and religious considerations was necessary to demonstrate to have fulfilled it. With this purpose first some insignias that can only be obtained at Santiago were employed (scallop Shell). 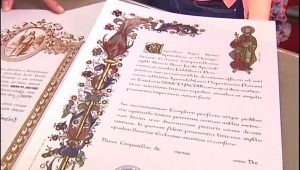 It is nof difficult to understand how easy it was to forge this sort of certification. Forge that forced the Compostela prelates and even the Pope to punish with excommunication to some devotes. More efficient for the difficulty to be forged were the so called probatory letters during the XIII century. This letters were the origin of the Compostela. During the XVI century the Catholic monarchs constituted the foundation of the Royal Hospital and they order to built the nowadays Parador where by showing the Compostela pilgrims may be accommodated free for 3 days. The sanitary necessities of the pilgrims became the institution on the most important hospital of Galicia and later on the prestigious medical school of Compostela.

The birth of the motor vehicles and at our century the popularization of the tourism meant a pilgrimage crisis. The effort and sacrifice to expiate the sins that the pilgrimage used to be became a pleasure activity to do during holidays. The non religious authorities began to give certificates imitating the Compostela. Thanks God the incumbents of the Metropolitan Santiago’s church continued providing the certificate, and claiming to the Catholic monarchs Hostel the compliance of its foundational purposes although with few success.  The nowadays Cathedral limited the Compostela to those who do the pilgrimage until the Apostol thomb at least 100 kilometers walking or 200 kilometers by bike or horse. So other ways of pilgrimage are excluded except disabled persons who can do it with no motor Wheel chair.